Basket Range is an exciting and progressive little pocket in the Adelaide Hills. Yes – it does receive a lot of attention, although it’s easy to see why. My good friend and hospitality legend Sarah Feehan recently showed me around some of her favourite spots in the region for Broadsheet Media. Sarah exudes experience; having worked at Copenhagen’s Noma, Attica in Melbourne, the Great Southern Lodge on Kangaroo Island and Orana in Adelaide, it’s safe to say she knows her stuff!

Sarah normally heads the FOH team at local pizza joint Lost In A Forest, as well as South West Supper Club; a series of pop up long table dinners with her partner Tim Bourke, although for now she’s headed off to Talum for a couple of months to work at the next Noma popup.

We started the day at Sarah’s place for an aeropress from local coffee roaster Moshico Coffee before heading over to Amber and Taras’ place to pick some herbs and flowers for Lost In A Forest, where we had lunch. As Sarah explained, the wine list leans towards low intervention, delicious, light reds and crunchy whites, a strong emphasis on small local producers, grower champagne and gamay from around the world.

“Ingredients are sourced locally to make pizzas that are as creative as the space itself. As well as using the Ochota vegetable garden, fresh herbs are grown by Amber in half barrels for diners to pick their own basil, dill, thyme, sage or rosemary to customise their order. It’s not uncommon for local friends to turn up with fresh pine mushrooms, porcini, herbs and other seasonal delights for menu deviation and creation.”

The Summertown Aristologist opened late last year, and has fast become a favourite for many reasons; the minimalist menu features locally grown produce (much of it from Jasper and Anton’s Basket Range farms), an impeccable variety of natural wines, all while you’re left in Aaron Fenwick’s hands (ex Orana, Street, Blackwood). The focus is on simplicity and it’s done so so well.

“The Summertown Aristologist is a place for locals to come together, eat pickles and saucisson, and, of course, drink wine.”

I grew up not far from Basket Range and often hung out in the area with my family. It’s a wonderful little spot to visit not only for the wine and produce, but also the people.

Lost In A Forest

JW x
Many thanks to Sarah for sharing your knowledge and passion for the region.
Images originally shot for Broadsheet Media, see the full article here.
Adelaide Hills, Basket Range, food, travel 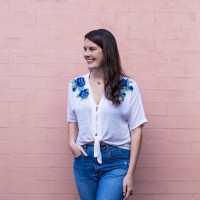